Formal verification tools like Kani check that certain classes of bugs will not occur in your program under any circumstance. Kani uses mathematical techniques to explore your code over all inputs, meaning that while testing is a great way to catch the first bug, formally verifying your code with Kani is a great way to validate that you’ve caught the last bug. To learn more about Kani, and how you can use it to prevent bugs in your Rust code, you can read the Kani documentation, or consult the real-world examples on our blog.

Code, however, is seldom static. As code evolves, how can we ensure that it remains correct; i.e. how do we catch the next bug? Many codebases already contain test suites and other checks that can run automatically. Developers can use a platform like GitHub Actions to run these tests upon every code change, as part of continuous integration, and even ensure that the tests pass before the code can be merged. This assures developers that a code change does not introduce a bug for inputs covered by the test suite.

For developers looking for a higher assurance of software quality, Kani proofs can be validated automatically as part of continuous integration. To this end, we are excited to announce the Kani Rust Verifier Action on the GitHub Marketplace.

How to use the Kani GitHub action

If you have a Rust Cargo project in a GitHub repo, using the Kani CI action is as simple as adding it to your GitHub Actions workflow file. Your Kani checks will appear as part of the same workflow as your existing tests, as shown in this s2n-quic CI report:

To get the latest version, visit the Kani Verifier action on the marketplace, and click on the green “Use Latest Version” button, which will give you a yaml snippet you can paste into your .yml file. 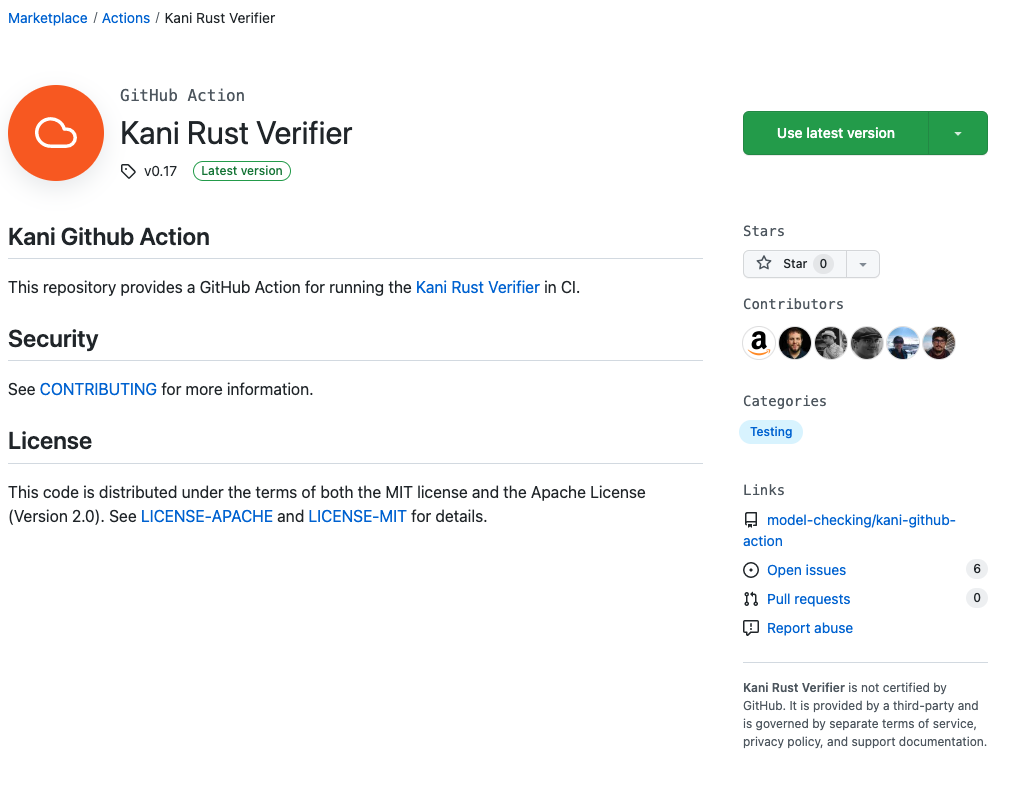 For full details, consult the documentation.

When to run the Kani action

CI systems such as GitHub Actions offer multiple options for when workflows, such as the Kani action, should execute. Options include validating every push to every PR, validating once on a PR right before merge, or validating on a fixed time interval, such as nightly. In general, the sooner verification runs, the better: it’s easier to debug and fix issues when they’re found right away, rather than after they’re merged.

Some proofs, on the other hand, may be memory and compute intensive. In these cases, your organization may prefer nightly jobs to reduce cost and avoid introducing latency to the PR process. Our suggestion is to start with running proofs on every pull request, but start moving some of them to a separate nightly run if they begin to take too much time.

The Kani GitHub Action executes on standard GitHub Action Runners; these machines provide 7GB of RAM and 2 processing cores. Formal verification can be memory and compute intensive: if you find the Kani action running out of memory and CPU, we suggest using large runners or AWS CodeBuild.

To test drive Kani yourself, check out our “getting started” guide. We have a one-step install process and examples, so you can start proving your code today. If you are running into issues with Kani or have feature requests or suggestions, we’d love to hear from you.